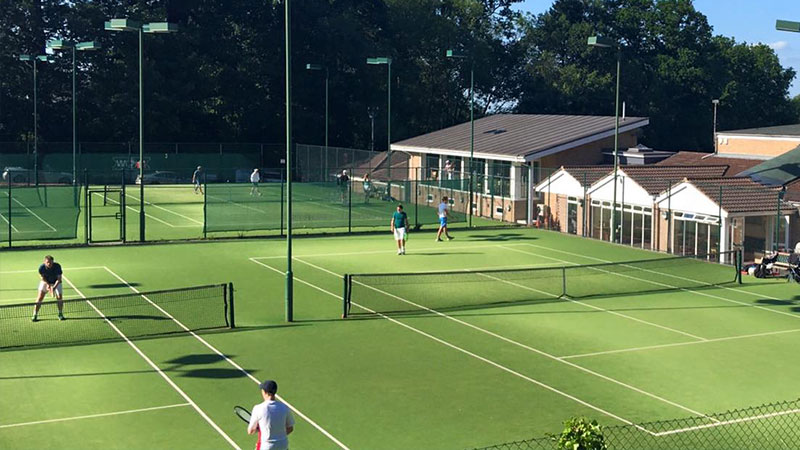 Nestling under the picturesque backdrop of the Malvern Hills, the Manor Park Club offers excellent playing and coaching facilities on a variety of surfaces including 3 indoor acrylic courts.  We are a friendly club, keen to increase our membership at all levels of play. Many members are enthusiastic about social doubles tennis, for both daytime and evening play. Competitive tennis is strong, with a high number of teams competing in county and national leagues. Groups and teams are always ready to welcome new members.

For answers to questions about tennis facilities and membership please contact the Membership Secretary by email at: tennis@manorparkmalvern.com

Indoor tennis at Manor Park is now administered by the Club, following on from the period of joint administration with the Herefordshire and Worcestershire County LTA.  The arrangement for use by the County for junior training continues as before.

The indoor facility comprises three Synpave spring cushioned acrylic courts with a viewing platform upstairs, changing rooms and toilets. The original two court facility was upgraded in 2010 with the addition of a third court and much-improved viewing facilities.

A tennis membership package for indoor play only is offered at a reduced annual fee, making such play available for members of tennis clubs which do not have indoor facilities. The offer includes an off peak option (see below). To join for indoor membership only, click here (then go down the list of options and choose Tennis – Indoors or Tennis – Indoors off peak).

Indoor tennis courts are booked and paid for online. To make an indoor court booking members need a unified ClubSpark and LTA Advantage username and password. The club office can provide advice on achieving this.

The court fees for use of the indoor facility are as follows:

Off peak rates operate up till 5.30 on Monday to Friday.  Peak rates apply to weekday evenings and all day at weekends. The winter rate applies from 1st September to 31st March. 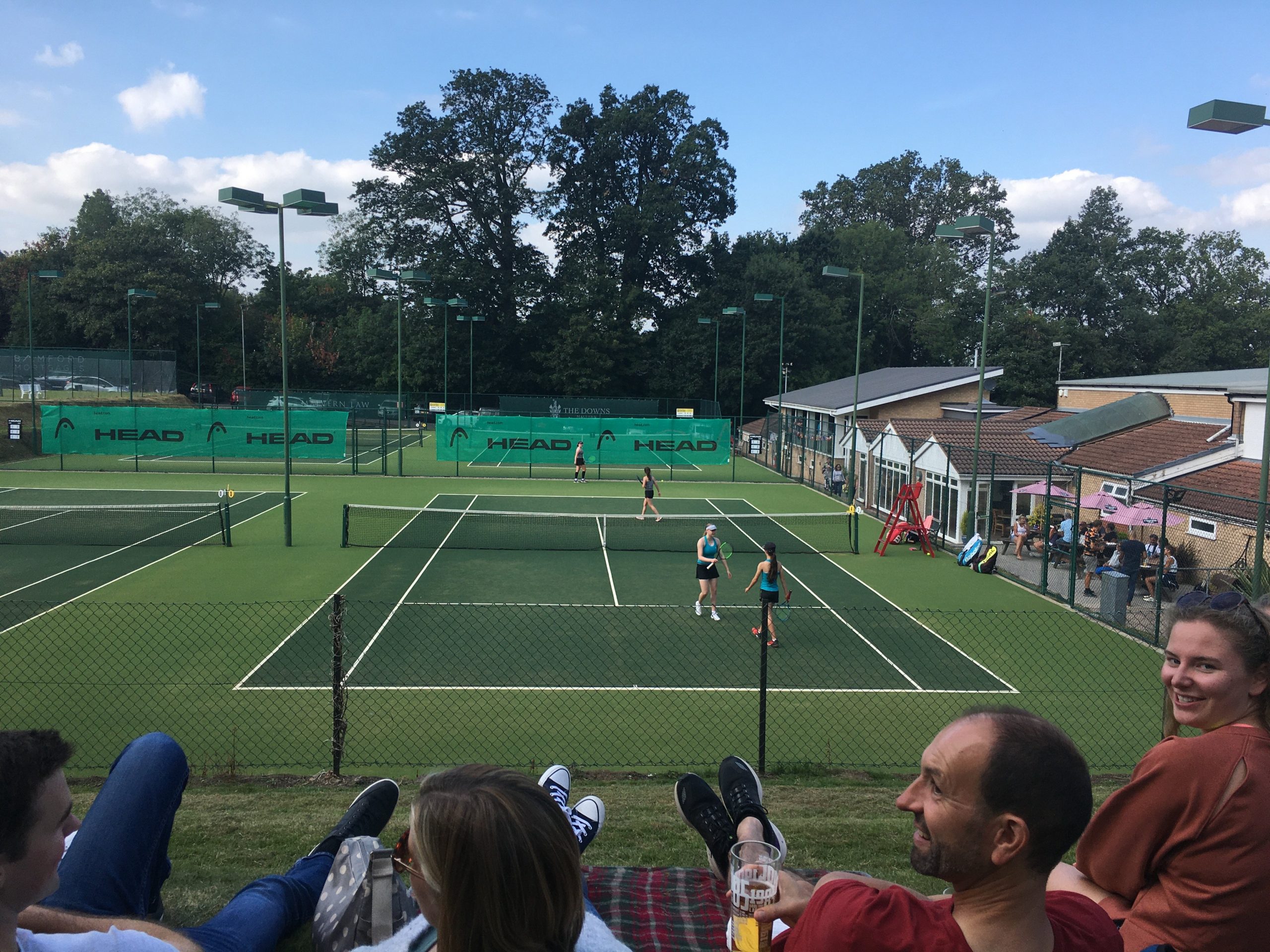 We are a friendly club with easy access and an excellent range of playing facilities allowing the club to serve as the Herefordshire and Worcestershire County Centre. Our Café Bar overlooks our show tennis courts with the Malvern Hills as a spectacular backdrop.

On-site parking is available for over a hundred cars. The Clubhouse offers changing facilities, meeting rooms and a kitchen. The club office is open on weekday mornings. 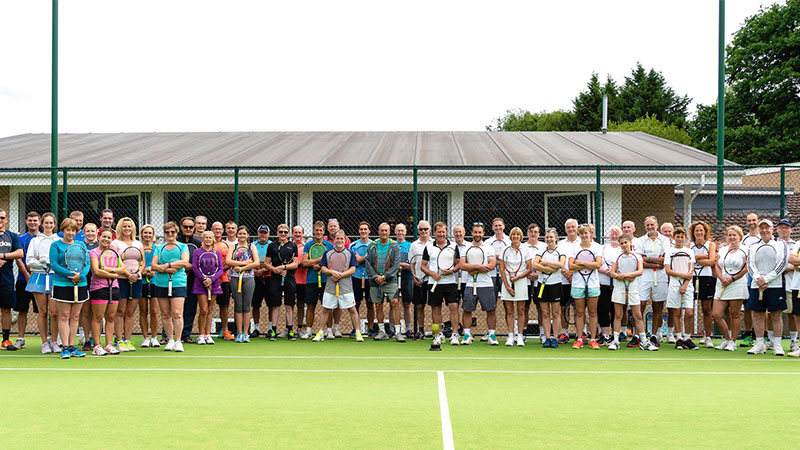 Membership runs for 12 months from the date of joining. Temporary membership is also available, on application.

Adult membership: the options are Tennis or Rackets. Tennis is for outdoor and indoor tennis. Rackets is for Tennis and Squash & Racketball. The monthly adult fee is £26 for Tennis, £34 for Rackets.

A family membership option includes all children under the age of 19, with a monthly fee of £50 for Tennis and £58 for Rackets.

The annual fee for indoor tennis only is £25 off peak, £40 anytime.

For more information, including details on country membership and how to arrange a visit to the club, please send an email to: tennis@manorparkmalvern.com

Manor Park offers genuine year-round tennis for all abilities in a friendly welcoming atmosphere. There are wide-ranging opportunities for all ages to get involved at all levels of play from social doubles to both senior and junior national and county leagues.  The club also offers a wide range of coaching for all ages and abilities. Free taster sessions are offered to prospective members who are welcome to contact us to arrange a visit.

If you don’t feel like booking a court and organising your own game you can get involved in any of the following:

Outdoor Court Roll-ups (turn up on the day)

Members are welcome to entertain their visitors at Manor Park. The court fee for visiting adults is £5 and for juniors £2. Payment should be made at the club office or the Café Bar. A visitor is limited to three visits within twelve months.

‘Pay and Play’ is available for non-members for play on two of the floodlit acrylic courts at a fee of £10 per court per hour. Tokens to access the courts should be obtained from the club office or the Café Bar. Rackets and balls can also be hired. All players must wear suitable tennis footwear on the court. 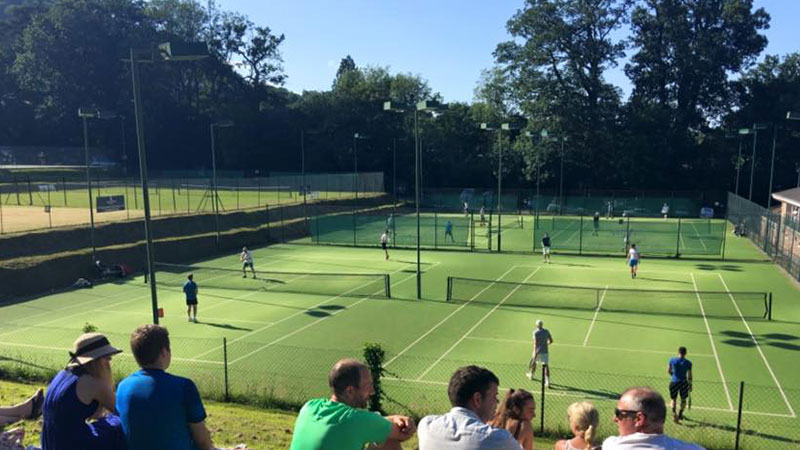 Various competitive tennis events take place at Manor Park in summer and winter. Teams compete over the range of Herefordshire & Worcestershire county leagues in both summer and winter, with teams in the top men’s, ladies’ and mixed divisions. Club Tournament is the main internal competition, supplemented by one-day events and a singles ladder. For juniors, there are tournaments and age-related county competitions.

Click here to see the results of H&W county league results for men’s, ladies’ and mixed teams. This covers all club teams in the leagues and includes latest league table positions.

Click here to see the Club tournament rules for 2021.

Manor Park tennis section has a large active membership of adults and children keen to improve their standard of tennis for social and competitive play.  The club is fortunate in having an excellent team of Lawn Tennis Association Accredited+ qualified tennis coaches from Malvern Tennis Academy who provide coaching for all ages and standards (with ages from 3 years and upwards) in both individual and group sessions for beginner, development and performance players.

For all coaching enquiries whatever your requirement as a member or non-member contact  Malvern Tennis Academy or email:  tennis@malverntennisacademy.com 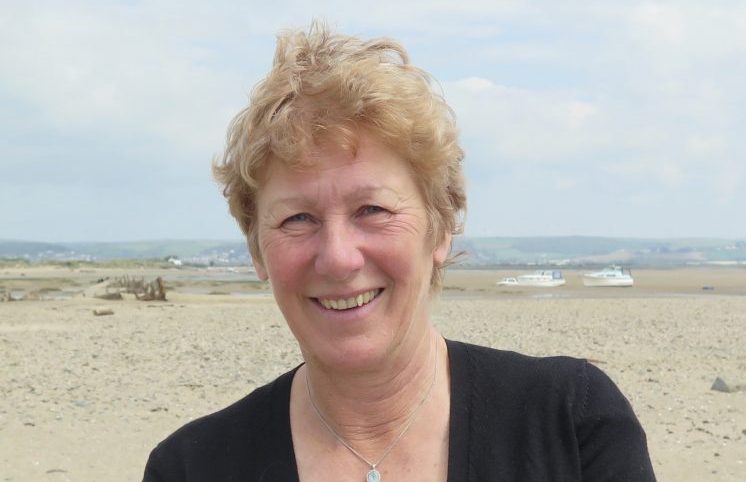 Details of how to contact Alison are on the Club Noticeboard and in the Member’s Area.

Alison is a keen tennis player and has been a member of Manor Park for around thirty years. She is a “mostly” retired medical practitioner and has experience of safeguarding and welfare issues.

Please feel free to approach Alison if you have concerns or worries about safeguarding and wish to discuss them further. 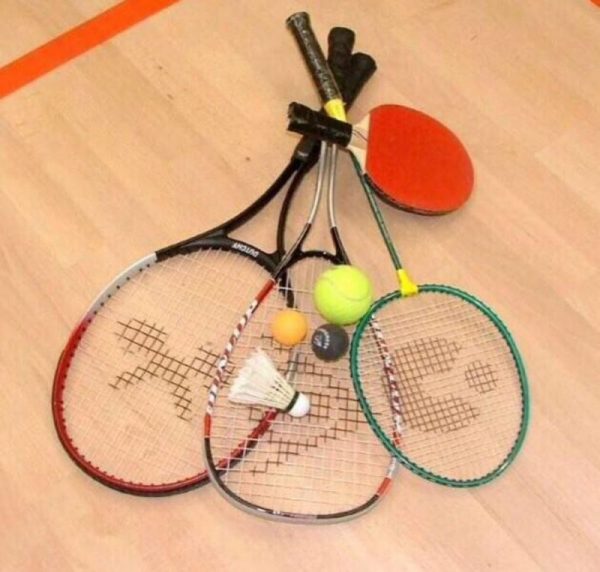 Save the date! Manor Park is to hold its first ever Racketlon tournament on April 29th for members – to find out who is the best rackets player in the club – covering badminton, squash, tennis and table tennis. Further information and entry forms will be available in February. 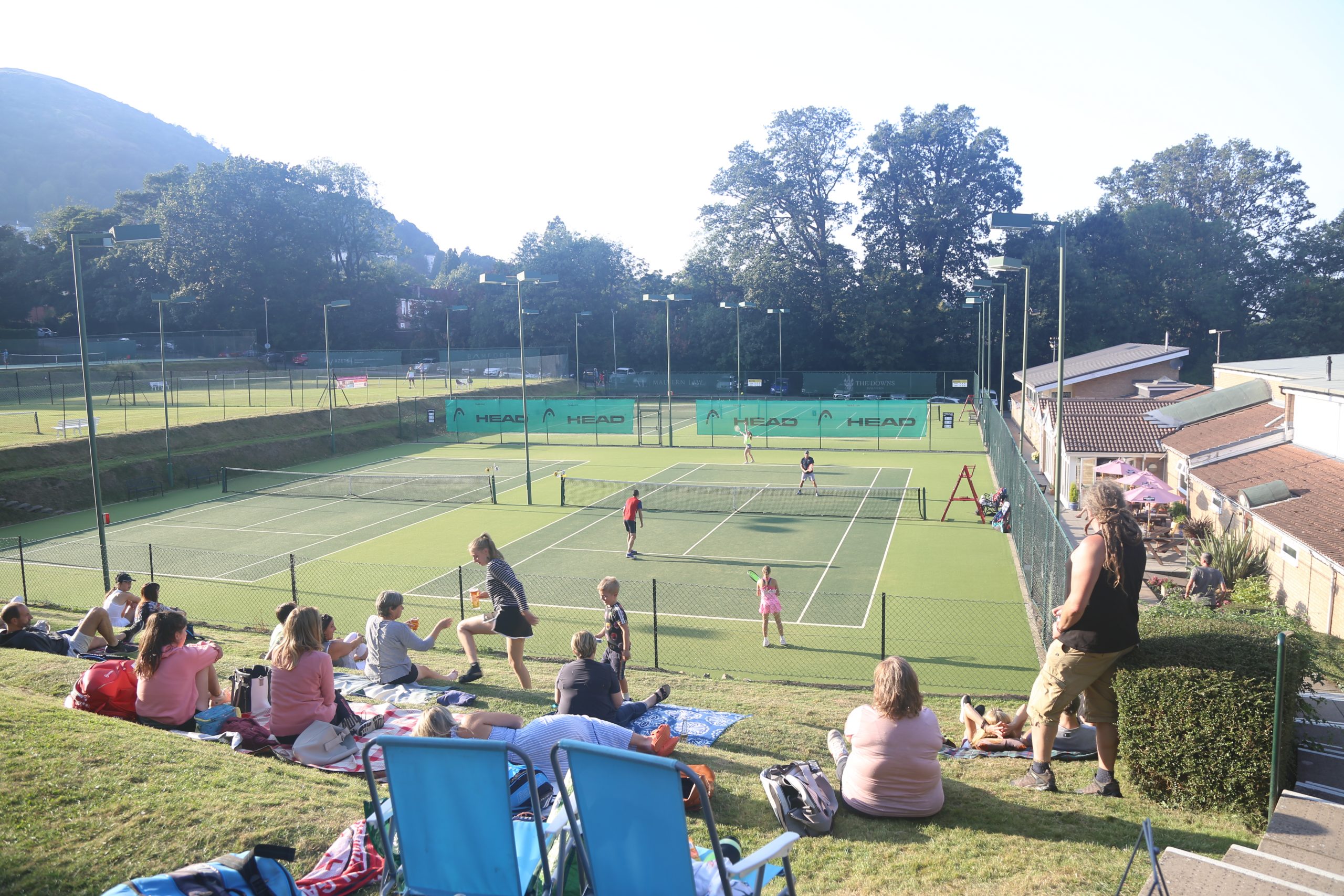 Winter sunshine enables full advantage to be taken of the all-year-round tennis activities including morning and afternoon roll-ups and organised sessions. Special mention is appropriate for the Saturday afternoon social session starting at 2 pm with refreshments served in the café-bar afterwards – visitors welcome. The focus on dark evenings is on the three indoor tennis courts and the eight floodlit courts for social, match practice and junior rotas and for sessions arranged by members.

A development which took place on 1st January 2023 has been the full incorporation of the indoor courts into Manor Park Club. As a preparation, the indoor courts were closed during the last week of October for major maintenance work. The four grass courts have had the court surface lowered to eliminate the camber at the court edges. The result should be an improved playing surface for the summer.

Rackets members have the benefit of improvements to the squash courts, with underfloor heating, a glass wall on Court 4 and more spectator space. These changes have been paid for by funds released after the closure of the Hornyold squash club. The success of a crowdfunding activity has made possible the make over of the changing rooms.

Tuesday evening mixed doubles social tennis is played on the indoor courts between 1st October and 31st March. All Manor Park tennis and full rackets members are eligible to play. It is also possible to join for indoor tennis only. Indoor court fees are charged at £4 per Tuesday evening session. Play is on a rota basis, with three evening sessions: 5.30 pm to 6.45 pm, 6.45 pm to 8.00 pm and 8.00 pm to 9.15 pm. Members are scheduled on court approximately on alternate weeks after being asked in advance to state weeks they wish to avoid. Players need to find substitutes if they are unavailable for play when scheduled. If you would like to be included on the Tuesday evening winter mixed doubles rota or the list of reserves please use the ‘Contact Us’ page of the website.