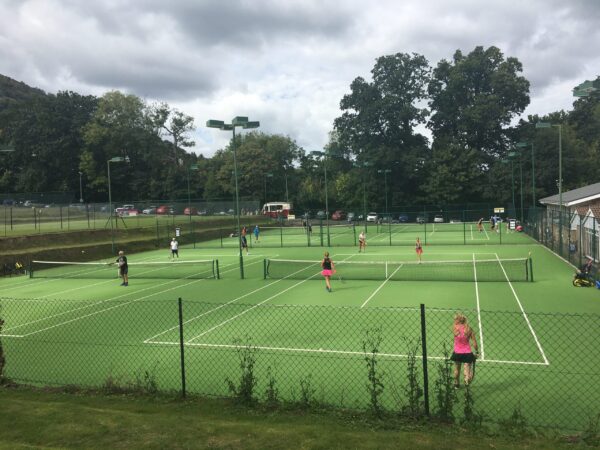 The Club Tournament got off to a slightly later start than usual due to the pandemic, but once tennis became one of the first activities to be up and running the club became busier than ever with lots of people venturing forth for much missed exercise and meeting friends and it became apparent that it would be possible to run the event after all. There were good entries across all events as there was no other competitive tennis to distract people, indeed very little competitive sport at all. Some great tennis was enjoyed throughout the rounds as prospective juicy encounters were publicised by Chris and people came down to enjoy a drink from the bar and a view from the bank. The Men’s Semi-final between Simon Wikeley and Tobie Timmermans stood out as a highlight with Simon narrowly triumphing in a third set tie-break.

Finals Day was a beautiful sunny day, albeit a little chilly in the shade, but alas the dreaded virus had come back to haunt us and a number of events had to be postponed due to people returning from holidays and needing to quarantine or otherwise self- isolating. Nevertheless, with crowds, exceeding those at the US Open, there were matches to entertain throughout the day.

The Men’s Singles Final was one of the first events of the day and proved to be an interesting contrast of styles between the old-school Mark Rowe and Simon Wikeley who was looking to regain the title which he won in 2017 and 2018. Simon eventually won out in two fascinating sets.

The Ladies Final was an encounter between reigning champion Katie Lewin and Ellie Fleming a previous 3 times champion. In a high-quality match Ellie came out the winner in straight sets to get her name back on the trophy. Katie Lewin soon returned to court with partner Alice Davey in the Ladies Doubles Final where they fought back from a set down to take the title against Hannah Griffiths and Jilly Witcomb.